Snow White is already dancing on the bales of hay and the pirate with the black hat and colourful water pistol has already launched his attack on innocent passersby. 8am at a hippy family festival in Sussex. Only one of the great festivals in England.

„Have you seen mommy?“

Kids in fancy dress are charging about the festival grounds, parents are sipping their first coffees and the day can start. So much for simply sitting around at festivals, drinking beer or standing in front of the stage listening to the bands. The Elderflower Field Festival is a family festival with around 1500 visitors. And everyone of them wants to be entertained. The festival is split into two areas. The meadow hosts the main stage and the camping site, and the forest is home to yoga, massages and crocheted blankets. A day at one of the festivals in England: 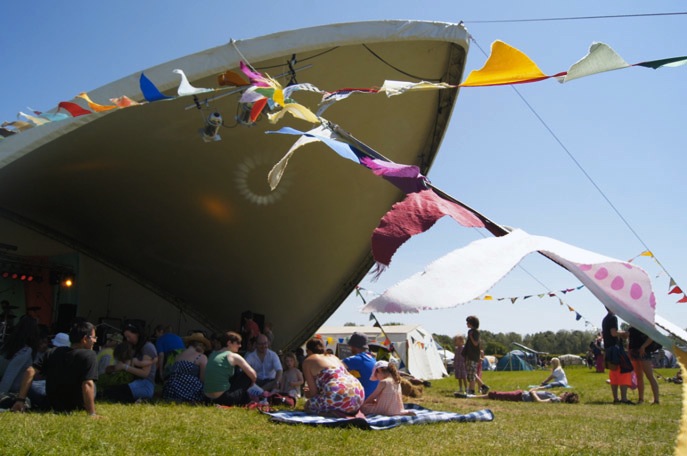 8am – coffee in a Bentley

The festival grounds belong to the Bentley Wildfowl and Motor Museum, which is offering festival goers a Full English Breakfast – vegetarian sausages, baked beans, hash browns, fried eggs and a nice cup of coffee. I’m sat soaking in the morning atmosphere and my breakfast on a beautiful green wrought iron chair with a view over the green meadow. What a start to the day! Good morning England! 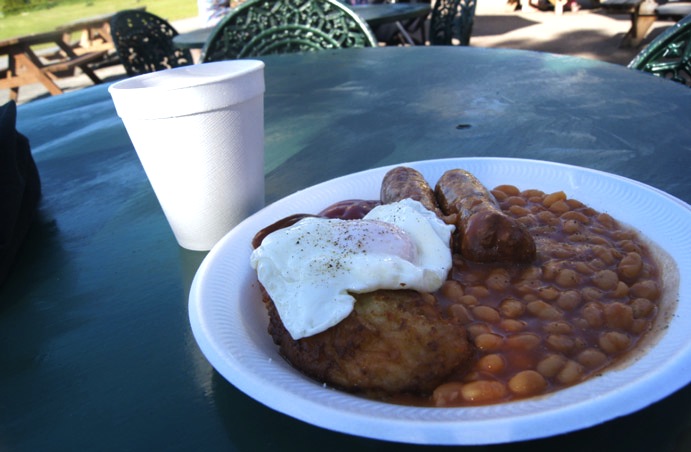 9am – calm before the storm

Suddenly it’s silent throughout the festival grounds. The kiddies sports camp has begun. London is hosting the 2012 olympic games, so the Elderflower Field Festival has designed a range of sports activities for all the children here. Three hours of running about for the kids, and peace and quiet for the parents.

10am – Hot stones in the woods

I’m treating myself to a massage. Yes, a massage at a festival! Hot stone massage. Three healing huts, small round mud huts with straw roofs are being used as temples of wellbeing and have been equipped with massage tables. The huts were lovingly decorated with pink and orange fabrics and flowers. I got the last available massage appointment. They were all booked out three hours after the festival opened. I understand why. There’s enough free time during the day, the kids are busy and when else can you get a massage in the woods? 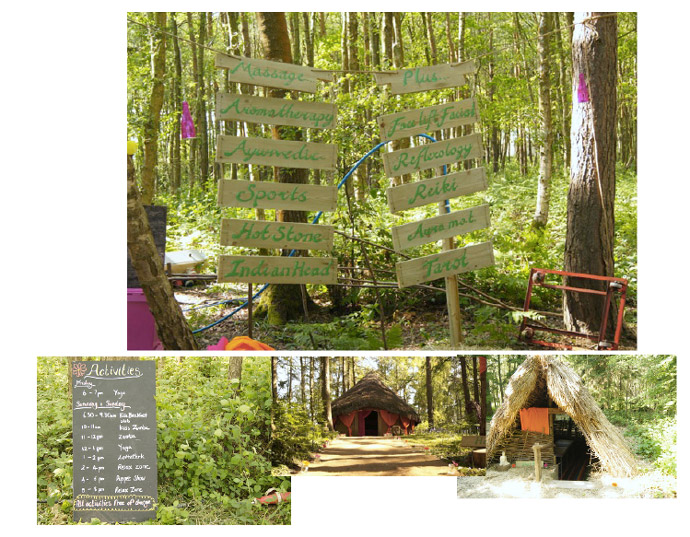 Noon – the cat and the sun

A bit of exercise has never done anyone any harm, so the festival has organised a fitness programme for adults, too. I decide to go to yoga at 12pm. Zumba was before that, Lotte Berk is after it. Two platforms were constructed in the woods. After filling out a health check form I’m handed a yoga mat, a bottle of water and did a few cat-like arches and prayed to the sun. In the background I can hear the calming sound of the wind in the leaves of the trees. Better than any medition CD.

I may not be six years old any more, but I still want one. In pink and purple and with sparkly glitter. Around the eyes. Not on my forehead, that’ll get all sweaty and smudge it. Flowers would be good. That’s what hippies wear, right? The professional face painter gives me some advice, I trust her instincts and let her paint my face. Of course in all the excitement I forgot to consider how I’d remove the paint at the end of the night…

The nicest and hippiest tent at the festival has got to be the Buttercup Cafe in the middle of the woods. Crocheted blankets on wooden pallets invite you to lounge around. For those who prefer to sit up straight there’s a wooden bench. There’s birling windmills, colourful bunting and hula hoops everywhere. The cafe offers freshly pressed juices, popcorn and bags of sweets as well as my beloved scones with butter and jam. Tea time in the hippie tepee. 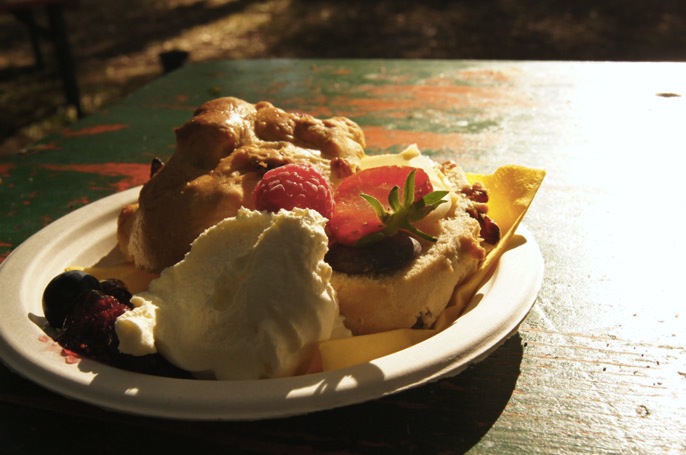 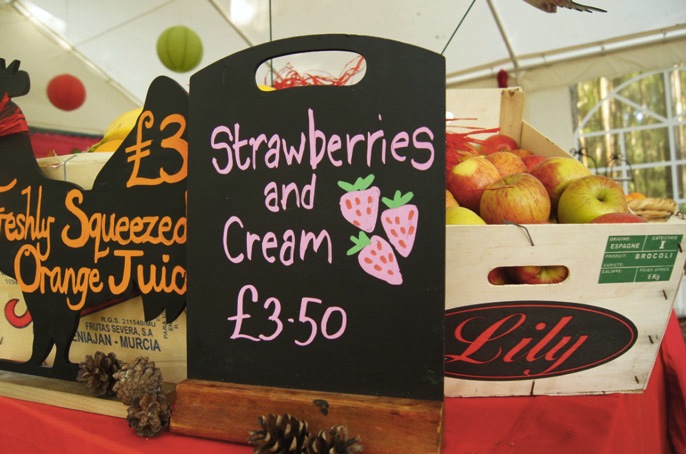 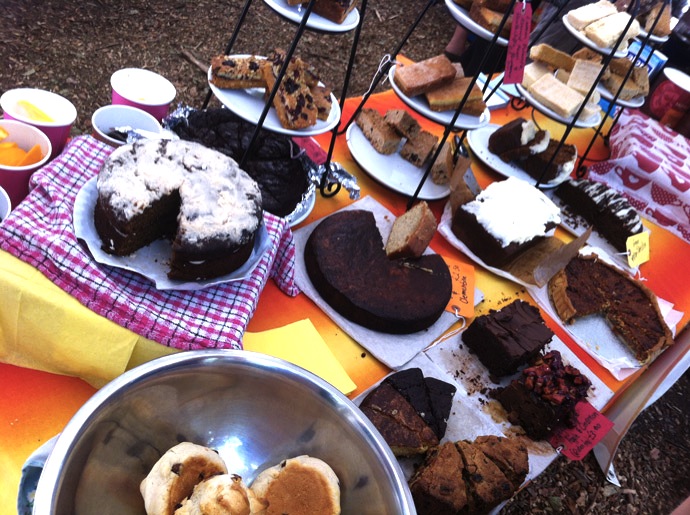 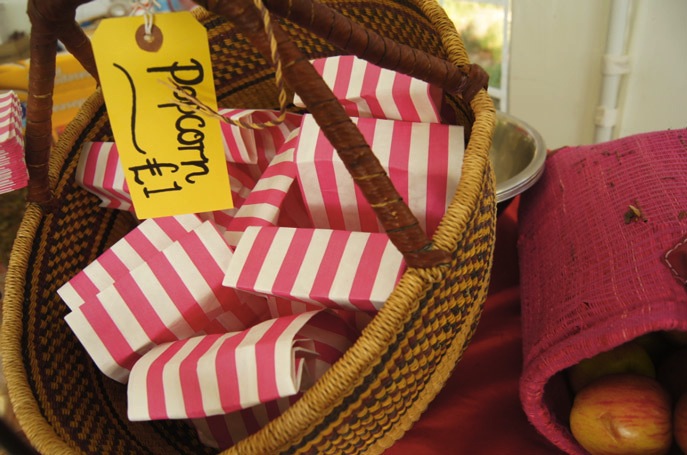 Hidden away in the woods next to the meadow is a ramp. There’s elbow pads, helmets and skateboards lying around too, which you can borrow and skate down the ramp. Today, there’s three hourlong workshops on for kids. What a shame that I’m not a kid anymore!

At 5pm they’re screening the film ‘town of runners’ in the cinema tent. I cosy up on a bale of hay and enjoy the film as the sun slowly sets.

In addition to massages and beauty treatments the healing huts also offer tarot card readings. Since I’m already feeling like a hippy, I can’t imagine anything more fun than having a wrinkly old gypsy with head scarf, missing teeth and skull and cross bone earrings sit across from me and tell me about my future. Sadly I’ve run out of money and forgot there’d be no cash machines in the woods… Maybe that’s a good thing though. And I did find a horseshoe in the woods earlier, so that’s a good enough sign I guess?

What to choose? Pork roasted over a spitfire? Burgers? Or Vietnamese noodles? The entrance to the woods hosts the food mile. Visual highlight: the old VW bus, in bright green, with a keychain in shape of a Beetle dangling in the window, which has been converted into a barbecue for lamb skewers. Even the pizza man values authenticity and brought his stone oven along on a trailer. In the end I choose a baked potato and hummus. 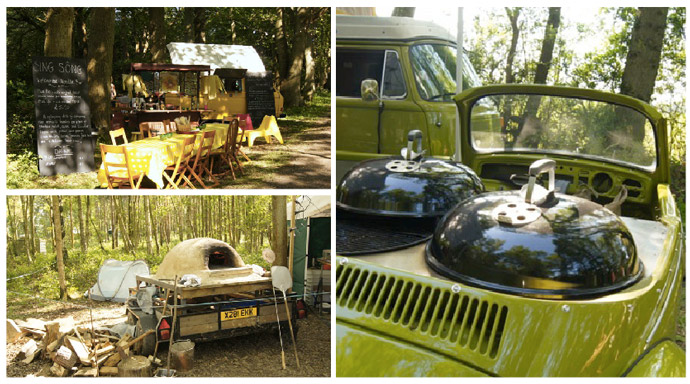 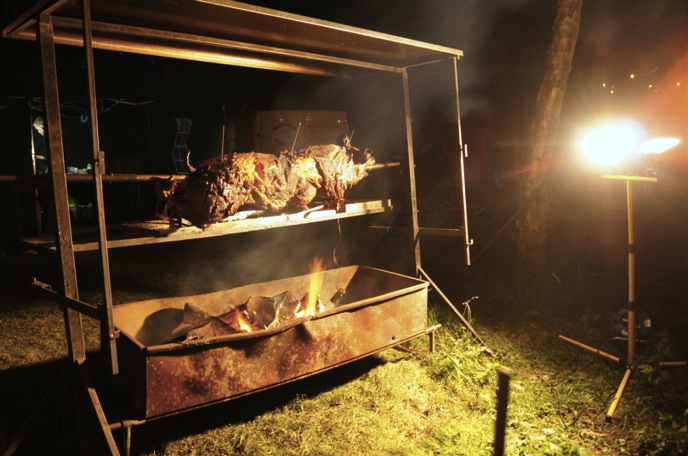 In the middle of the woods, between the healing huts and the skateboarding ramp is a lonesome white tent. The entrance to the tent is decorated with a Vinyl Thursdays Yurt banner, a society honouring vinyl records. Normally the three boys DJ on Thursdays in Lewis. No CDs, no cassettes, but vinyl. The Elderflower Field Festival isn’t only about back to the nature, but back to vinyl too! Everyone gets to pick a record and enjoy its sound. Or rock out to Take That in the party tent with disco lights. Of course I was the one who chose Take That in the first place ;)

The bar in the woods is open all day long. In the afternoon you can enjoy soda with elderflower sirup and an elderflower kir at night, also known as Hugo. You can’t see the stars, but 1000 colourful light bulbs instead. 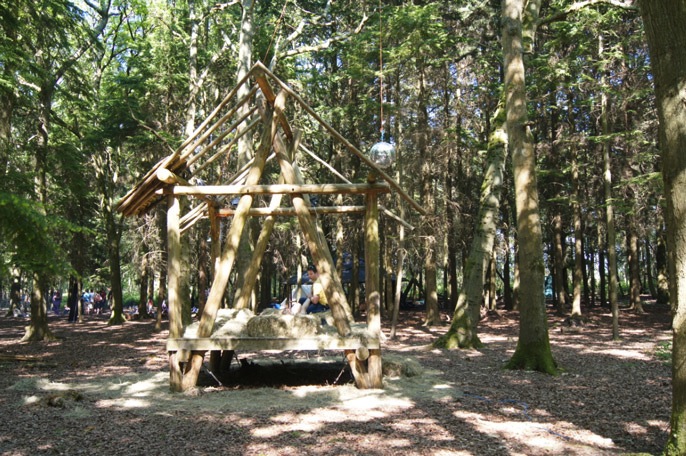 Bedtime. At least for the main stain. The accoustic tent is open until 11pm. Right now, L.A. Salami is playing. My absolute favourite, even just because of their name! For those who prefer silence but aren’t ready for bed yet there’s a silent disco. A wooden hut in the woods. Lit up, including a disco ball hanging from one of the trees. For 10 Euros you can borrow headphones to dance through the woods to. Strangely I met the most new people at the silent disco. People would bump into me, invite me into their dance circle. So bizarre that you’d make new friends at an event where you do nothing more than listen to music and don’t really talk.

Highlight of the festival and a bit of an experiment – the family picnic. At noon everyone gathers in front of the main stage and sits on blankets in groups of 10. I’m the new family member of ‘the Rash’. The four guys of the band travelled to the festivals in England with their friends and girl friends and they welcomed me into their circle at last night’s silent disco. Probably out of sympathy, since they saw me walking around by myself all weekend. But who cares. Funny group of people, great music à la Bon Iver and they’re good picnic buddies. Once all the groups are formed, everyone is handed a food hamper with products made in Sussex. Bread, hummus, cheese, pesto. A delicious but sad good bye. 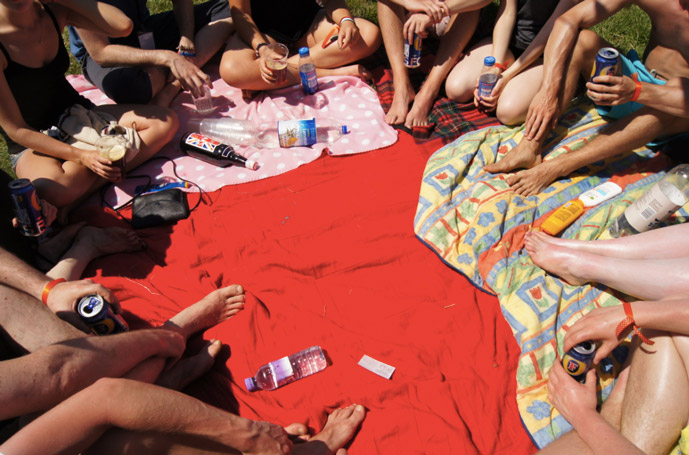 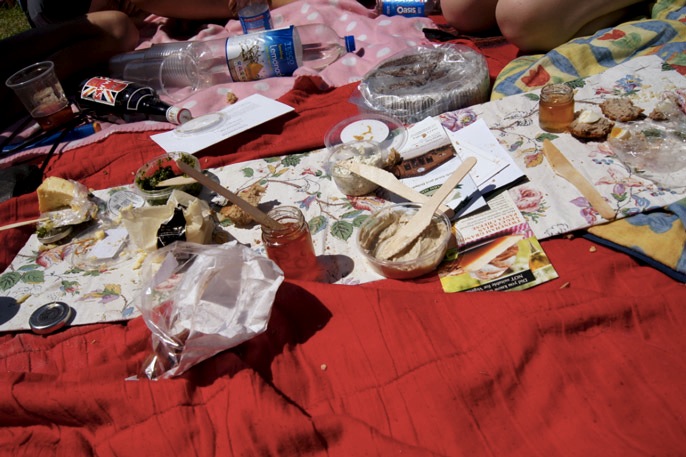 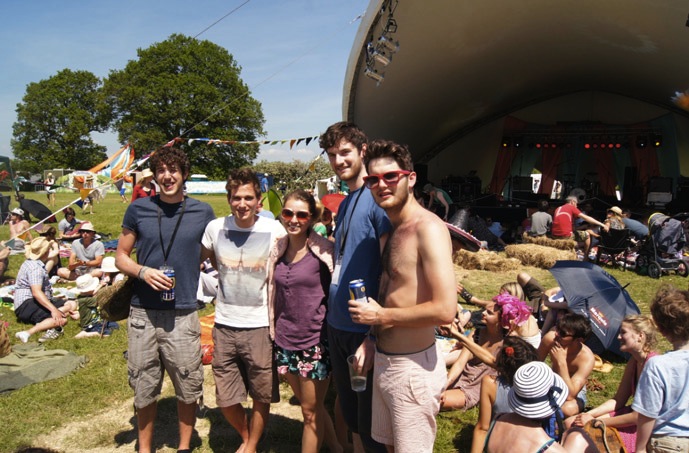 Festivals are playing fields. Not just for children.

A lot happened this weekend. Not just at the festival, but in my head, too. And I leave the festival feeling different than before. Happier and more content. Maybe it was the british country air. Or all the children. Or meeting the James Bond stunt man…. 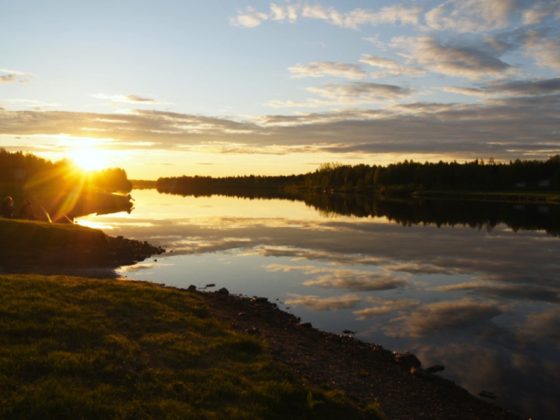