No one day is ever the same, I always hear new mothers say. This also applies to new dog owners. Let’s be honest, a dog is very much like a child, except it never gains independence and moves out. A dog always remains a baby that barks and depends on us, and we’ll never be able to fully understand. Boris has been with me for more than half a year now, and I’m still learning something new every day. About him, myself and the world. Here’s an overview of what’s changed in my life since getting a dog. 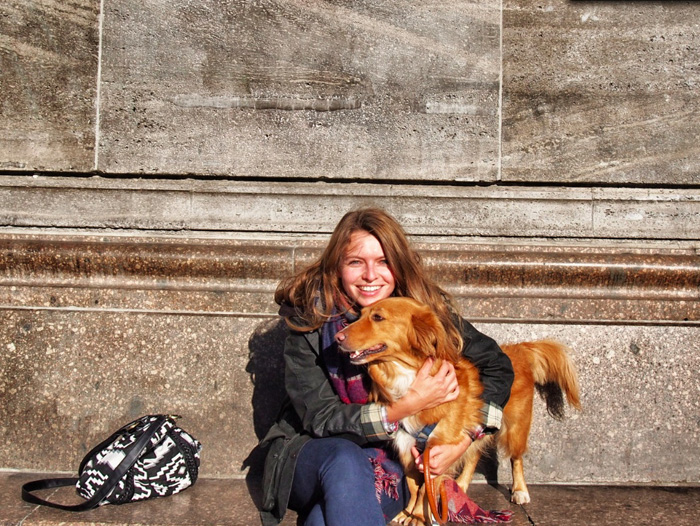 Life with a Dog 1: Welcome paranoia! There’s nothing, absolutely nothing, as disgusting as finding a tick in your dog’s fur.  This gross creative, that’s attached itself to my dog’s body, wiggling wildly with its legs while it sucks my poor dog’s blood. Yuck. Ticks make me shiver!
But it’s more than that. As a new dog owner you’re constantly grossed out and every itch is immediately attributed to fleas. No wonder I’m traumatised, though. During my first months as a dog owner I attended a lecture by the TV vet Dr Wieland Beck from the VOX series “Menschen, Tiere und Doktoren” (Humans, animals and doctors) at the dog hotel Magdalena. He explained that approximately every 7th dog has fleas, that can jump up to 50cm, whilst holding a giant plastic model of flea that was bigger than my head. Any more questions about why I constantly feel itchy? In fact, recently I felt so itchy that I went to the doctor to get it checked out. Of course it was nothing and just a typical fear of a new dog owner. I’m pretty sure I’ll be attributing cravings to a tapeworm next! Woop!
Life with a Dog 2: He just wants to play! Oh God, how I hate that sentence! There’s a giant dog running towards me, baring his teeth, snarling, and the owner just calmly laughs and mumbles something along the lines “Oh, he just wants to play!” Alright then. So he wants to “play” with a piece of my thigh, or bite off my dog’s ear? Since I’ve had Boris I’ve been learning about dogs’ body language and behaviour. Don’t worry, I’m nowhere near being a dog whisperer, but Boris used to growl when he met new dogs, and I was worried, thinking I’d somehow ended up with an aggressive dog?! But it seems that instead of an aggressive dog, I’ve got confident dog who likes to assertively inform other dogs that he wants to be the first one to sniff his new acquaintance’s butt! And when he plays with other dogs and chases them across the park, he makes a snarling noise that could easily be misunderstood. But really, he just wants to play!!!

Life with a Dog 3: He doesn’t smell, does he?! Autumn is upon us, bringing lots of rain. I admit, in the first few weeks Boris smelled pretty bad, especially his breath, because as a street dog he mainly eat manure. This of course meant he was rather gassy, and releasing terrible smells from both ends! Sometimes he moved only 2cm in his sleep, and he’d let out a waft of toxic  gases strong enough to knock you out. After a few weeks on proper food it disappeared though. Since then, he doesn’t smell anymore. Or so I thought. Recently, at work, after a walk in the rain with Boris, I noticed the person sitting next to me gradually moving further and further away, and even covering his nose with his sleeve. “Is something up?”, I asked. “Your dog stinks”. “What?” I was appalled. “No, that can’t be. He has no smell. What are you implying? I smell NOTHING. Do you guys smell something?” I asked the others. Their silence spoke volumes. But as a dog owner you simply don’t smell it anymore. Wet dog smells like a posy of roses – lovely! 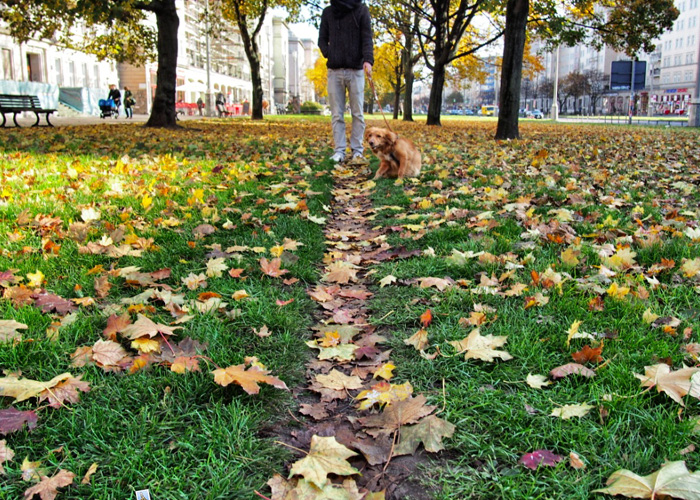 Life with a Dog 4: It can always get worse  After the incident of the dog poo in the subway I thought I’d reached my limit of shame. But no. It can get worse. You can not only embarrass yourself in front of ten people on the subway, but make one hundred Sunday tourists in the woods hate you. Last Sunday, beautiful weather, everyone had the same destination in mind – the Grunewald forest in Berlin. Including me and Boris, since he’d be allowed to run free. After six months I thought we’d developed a strong enough bond for me to let him off the lead. I’ve usually only done that when other dog owners where there, and their dogs were obedient and came back when called. Usually Boris would follow them and waddle back. So, last Sunday in Grunewald. Everything was going well, for the first 20 minutes he listened attentively and turned around every two minutes to check where I was. But then he recognised the steps down to the lake, and suddenly he was gone. I ran to the steps and called “Boooooooriiiiiis”. Nothing. He’d simply ran off without a single care for my existence! He didn’t react to the second “Boooooriiiiis” either, but all the visitors to the forest certainly turned around to stare at me. The third “Boooooriiiiiis” warranted annoyed headshakes, and the fourth one resulted in a number of irritated sighs. There was no fifth call, I was worried someone would whack me over the head with a stick! In the meantime, my dog was charging across the field like mad, as if he’d been locked up for weeks and this was his first day of freedom. So, he headed for the lake first, then the puddles of mud, and then the picnic blankets. In that order. Shaking his muddy coat right next to the sun revellers. There was nothing I could do. First everyone was annoyed, and then I think they were scared he could have rabies. At least they all knew his name from me calling him, and could keep him at bay by yelling “Boris, go away!” It’s not a good sign when the entire meadow knows your dog’s name… After 15 minutes Boris the Beast lay down, tongue hanging to the ground. A sigh of relief swept over the masses. Finally the strange woman had her dog under control. I think I’ve gone down in history as the woman running through Grunewald calling “Boris”. My dogwalker, who I sometimes accompany, recently pointed out that she ended up with ringing ears after I’d last joined her. So, if you were walking in Grunewald last Sunday and now have a strange feeling in your ears, it could have been me, desperately yelling “BOOOOORRIIIISSS!” 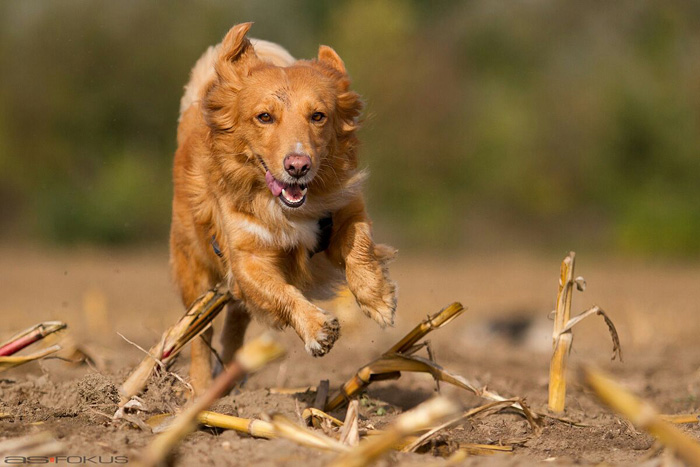 Life with a Dog 5: Say goodbye to hangovers! I recently had my first hangover since getting Boris. I woke up and my skull felt like it would explode. First I heard nothing, then gradually a monotonous knocking. The knocking of Boris feeling happy and wagging his tail, event if there’s something in the way. Like my wardrobe when he’s standing in front of my bed.  Don’t they have feelings in their tails? Isn’t it sore? Can they bruise? Either way, a tailwagging Boris is stronger than any hangover. I crawl out of bed and lie on the floor cuddling Boris for a few minutes. Then I pull on some clothes and head outside, very much resembling a zombie. Quite fitting, since it was the day after Halloween! BUT the fresh air worked like magic and replaced the three Aspiring that I would have taken otherwise. 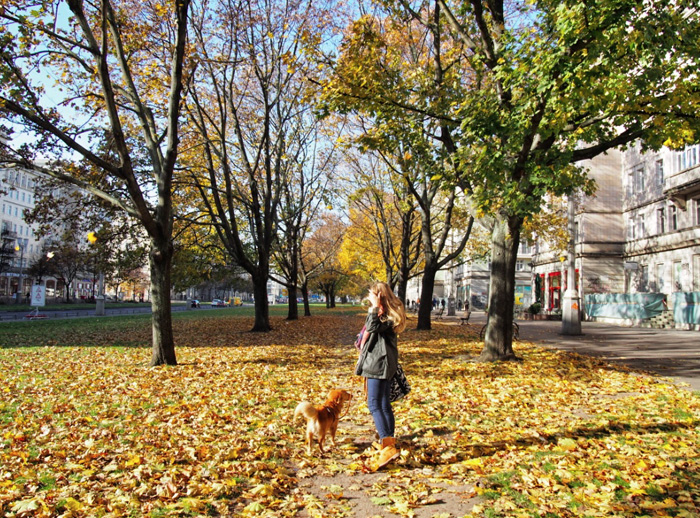 Life with a Dog 6: Target for Assholes  They do say people in Berlin aren’t the friendliest of folk. I’d never noticed until I got a dog. Yes, there are idiots who let their dogs run free and don’t notice where they poo. I definitely don’t think that’s okay. But I think most people are smart enough to differentiate between good and bad owners and lump everyone together or have a go at all dog owners. I was out with Boris the other day and he peed against a tree. eight metres away there was a food stall, where a man was eating with his wife. Suddenly he yelled over at me, if it was really necessary for me to let my dog pee there, since he was in a restaurant after all. I was speechless. First of all, it’s a food stall and not a restaurant. Secondly, I’m eight metres away. Thirdly, why is he trying to prohibit me from letting my dog do his business against a public tree? And finally, what would be a suitable distance, in his opinion? 2 kilometres? I understand if people get angry at dog poo in the middle of the pavement and isn’t picked up. But some people think they can just let their frustrations out on anyone. You’re not allowed to have a go at parents which young children. But for some reason it’s okay with dog owners.
Life with a Dog 7: Dog and Owner start resembling each other. Absolutely true. At least when it comes to fur colour and clothes. I can’t deny it, my dear dog sheds a lot. And of course the hairs show less on a light jacket than on a black coat. So I’ve adapted my wardrobe to my fourlegged friend. But not only that. I’ve invested in an incredibly expensive Barbour jacket, with a wired hood that stays up during the rain. Brilliant invention. And you can wipe it down, since it’s waxed rather than being a synthetic material. I was so proud when I bought it, since I know I’ll wear it for ten years and it’ll keep for then years too! 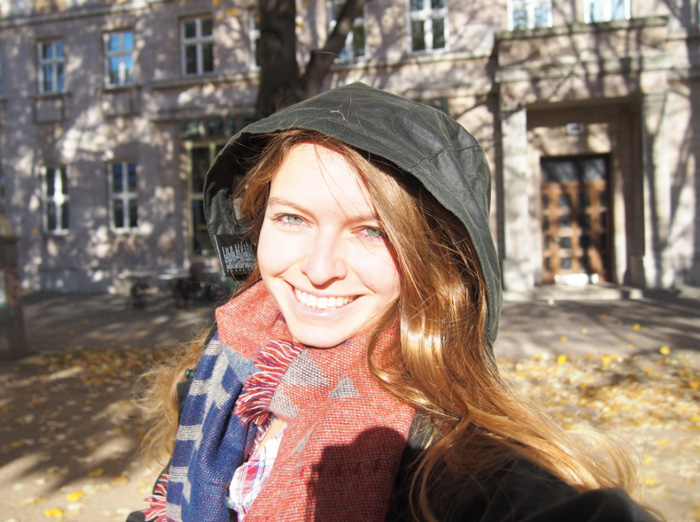 Life with a Dog 8: I want more!  So this stay between us. If Paul, my boyfriend, read this, he’d have a fit. But I recently caught myself thinking about getting a second dog. Not because he shits money, but firstly there’s so many tragic stories about abandoned dogs and secondly because Boris is a pack animal. He’s only entirely happy when he’s surrounded by other dogs. In September we spent a week in the Alpbach valley. I thought it was great, a great spot for peace and quiet. But I think Boris was slightly depressed after three days, with no other dogs to play with. I’m often asked questions like “How can you have a dog in the city?” But Boris loves it here. Where else do you meet so many loving and socially compatible dogs in the park?
Right, that was a small detour through my life as a dog owner. If you are thinking of getting a dog, please post your questions below. 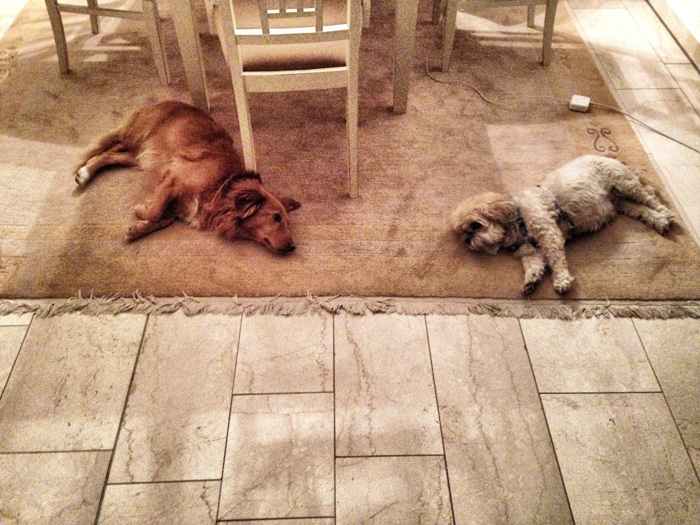 And finally pictures of Boris!!! 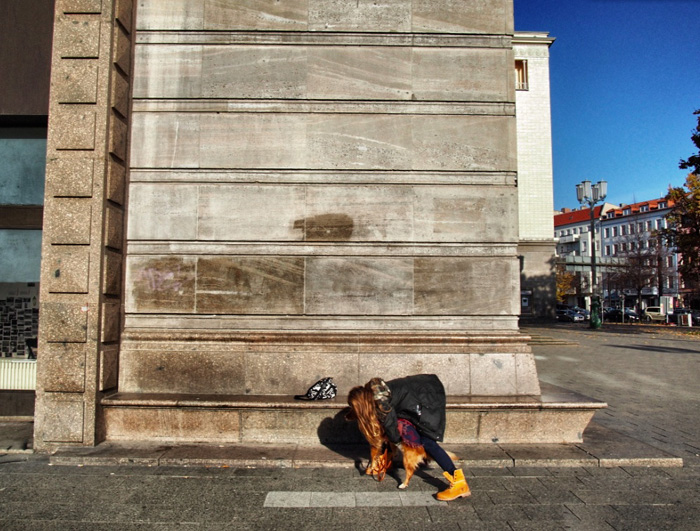 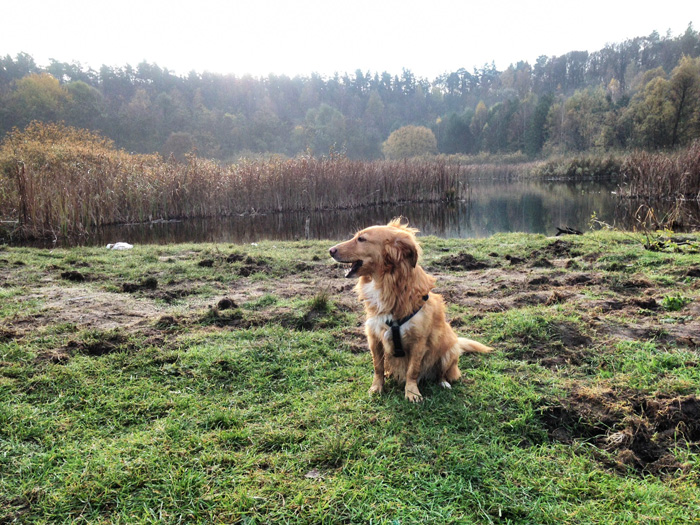 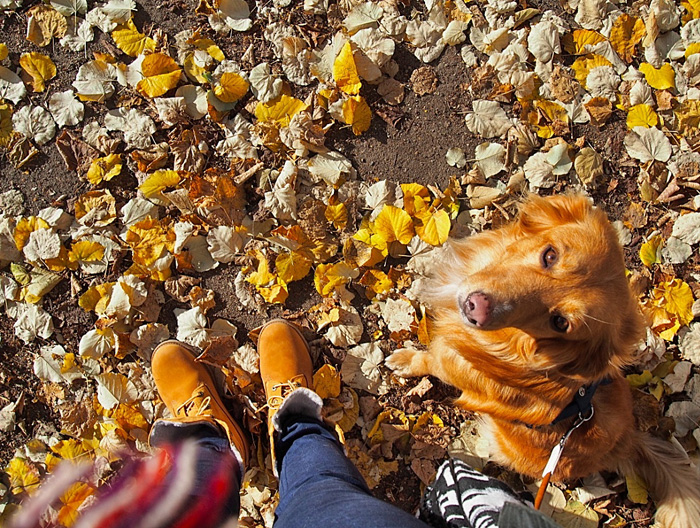 He’s hungry! No food for you though, greedy guts!! 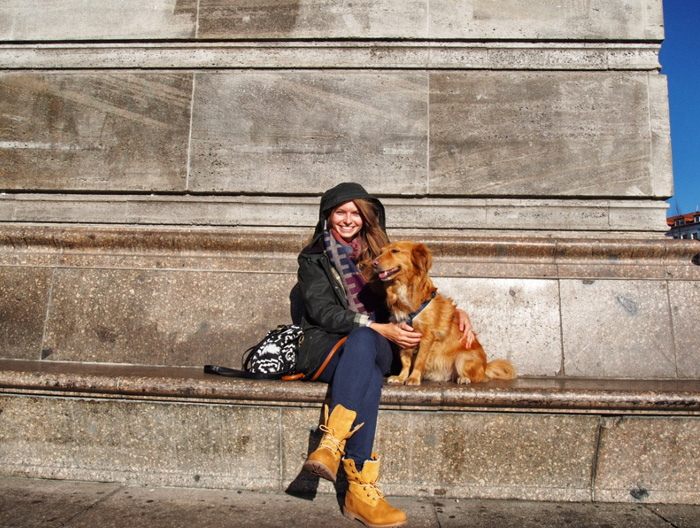 Perfect dog walking outfit: Jacket by Barbour – super expensive but I’ll have it for life! Big cuddly scarf by Review and trousers by Elements Eden. Bag by Elements Eden, big enough to hang across your body and keep your hands free. Comfortable shoes, mine are by Timberland. 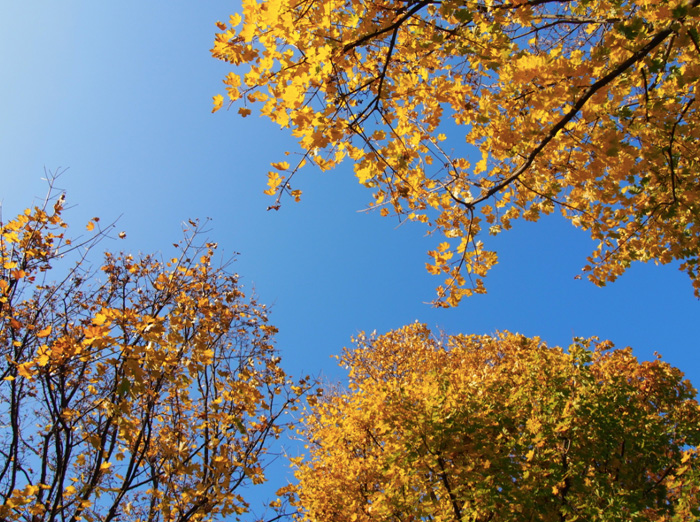 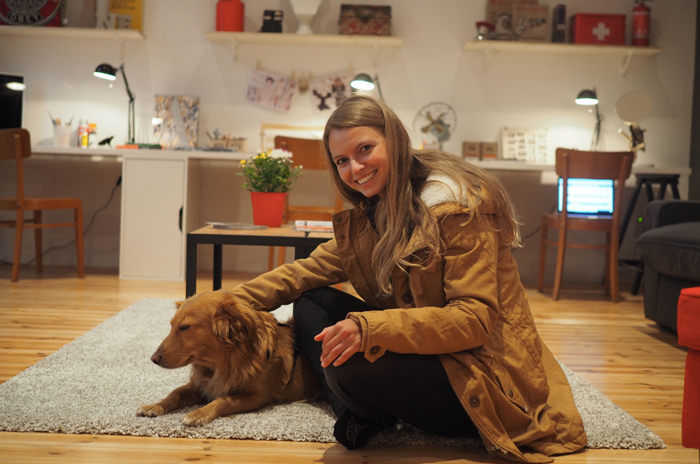 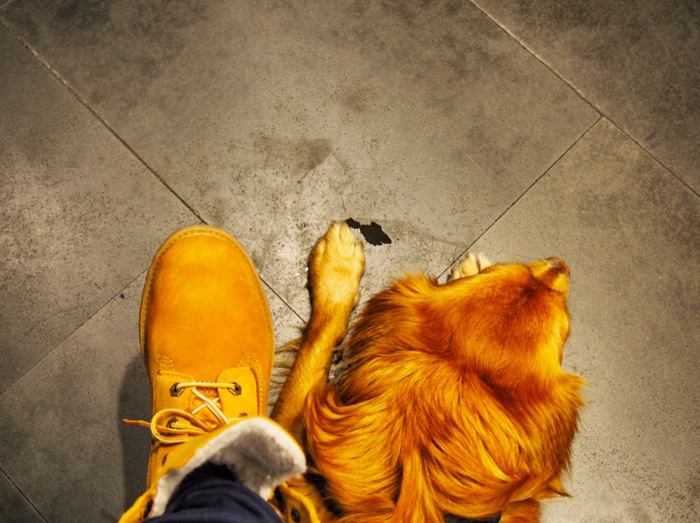 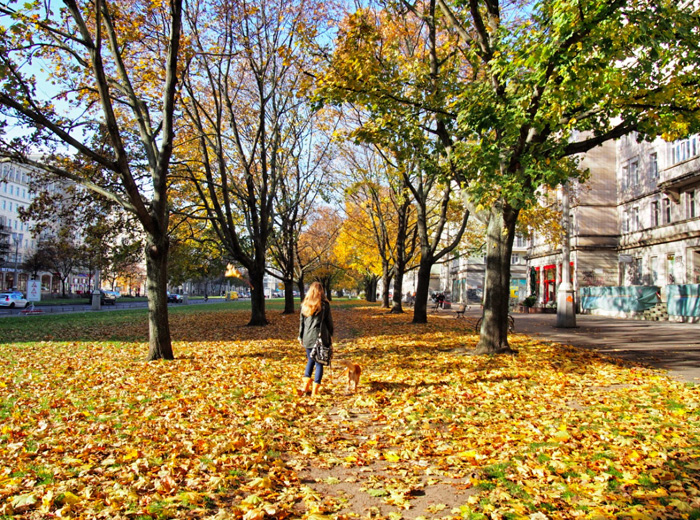 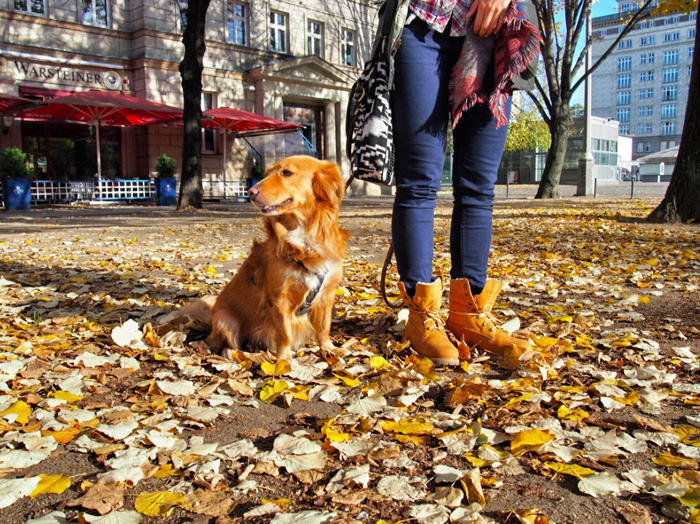 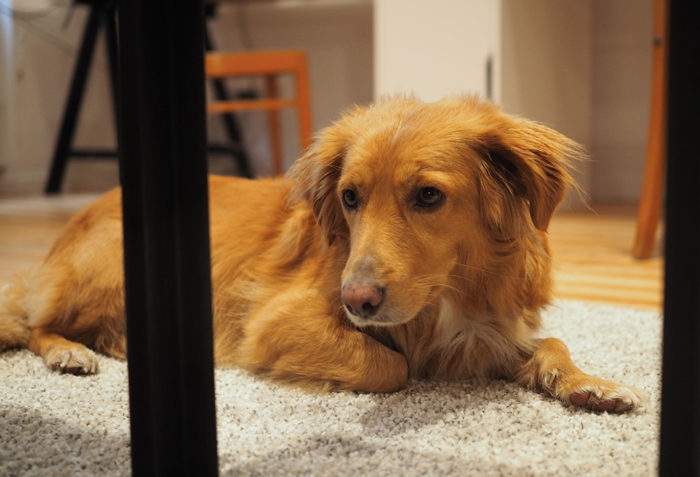 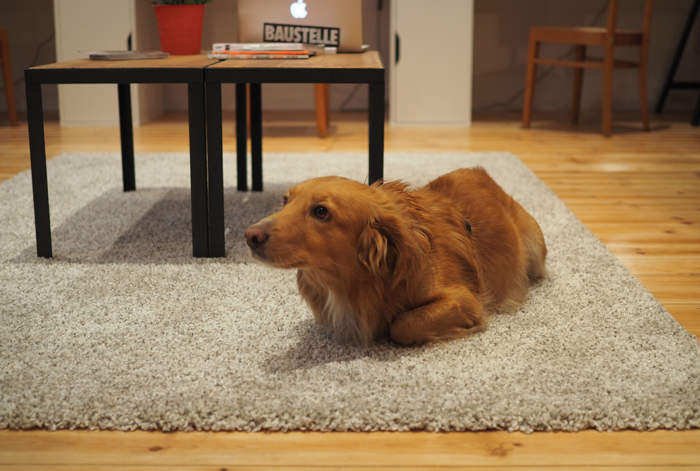 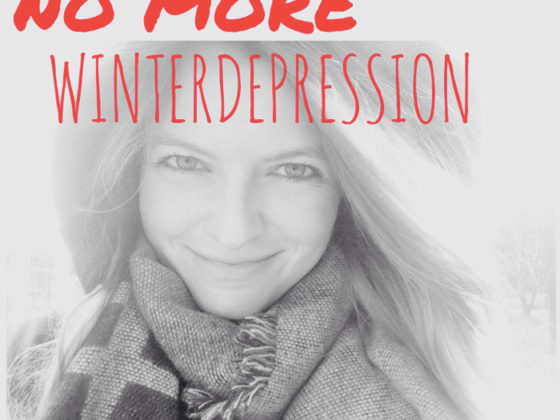 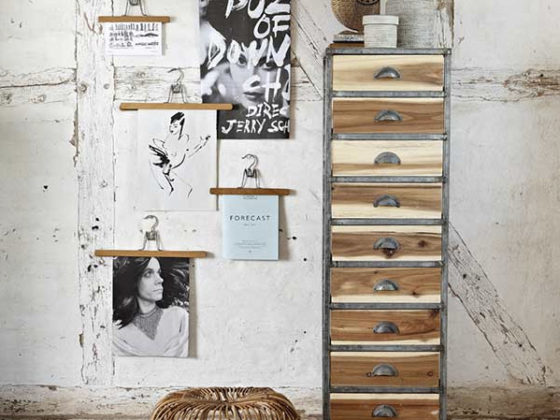