„Husaka, Husak, Husake“, chants the crowd and claps. Above them floats the pink penis, the sanctum, which is carried by men dressed as women. Their colourful wigs are askew, their eyes sparkling and laughing. The only thought that came to mind: long live the penis!

At the annual Penis Festival Kanamara Matsuri in Japan, the streets are filled with penisses on the first Sunday in April. Painted masterpieces on flags at the entrance, wood carvings or sweet delicacies to suck on. In the midst of it all, there are two old men sitting with a box of radishes asking visitors to carve a penis. Each year thousands of visitors come to Kawasaki, to honour three phallic statues and buy penis chocolate.

What sounds like an obscene event for perverts and causes unsuspecting passing tourists’s jaws to drop, is an ancient japanese tradition dating back to the 17th century. Back then, in the Edo period, when Kawasaki was famous for being a redlight district, prostitutes came to a penis worshipping shrine to pray for good business and protection from diseases.

Today everyone worships a gigantic pink penis. “Kanamara Matsuri” stands for “Festival of the steel phallus”. The male organ is celebrated as as sign of fertility and on this day is given special attention. This is guaranteed – the inside of the tempel is filled with penisses. There are penis pens, fertility sake, keyrings depicting kamasutra positions and two wooden penis canons on which you can take great souvenir photographs. And stroking the gland brings luck. As a woman you have to expect to be surrounded by 50 Japanese men to take a picture of the you clambering on the wooden penis.

The parade starts at noon, during which three penisses are carried through the city – one from back iron, one from wood and the third one is the two meter long pink penis. According to the legends, an evil demon is hidden in women’s vaginas and castrates men during their wedding night by biting off their penis. The black iron penis is supposed to protect the phallus and destroy the demon’s teeth. The parade is led by a priest and a devil, followed by singers, the three penisses and a load of visitors. After a large lap through the town that took two hours, we end up at the temple again. The penisses are worshipped, money for AIDS research is collected, the sweets are sold out and all the radishes are turned into penisses.

For those who need some extra luck for their love life, help with fertility, or are just seeking an extremely fun and kinky experience, make sure you mark the first Sunday in April in your calendar! The event takes place near Tokyo and it takes less than 30 minutes to the station at Kawasaki Daishi and then you just follow the penisses!

My conclusion: The Japanese are an affectionate people, who are happy for everyone to join their celebrations and they have a great sense of humour. I have to say I’ve found my favourite festival, the Penis festival Kanamara Matsuri in Japan. It’s not as salacious as it sounds, and is a celebration of tradition that brings together every generation – kids run around phallus statues, the elderly suck on penis lollipops and everyone respectfully worships the penis together. Come see and be amazed, is the motto. Also, there is a vagina festival, too. Where? In Japan of course, and it’s in my festival diary for 2014! 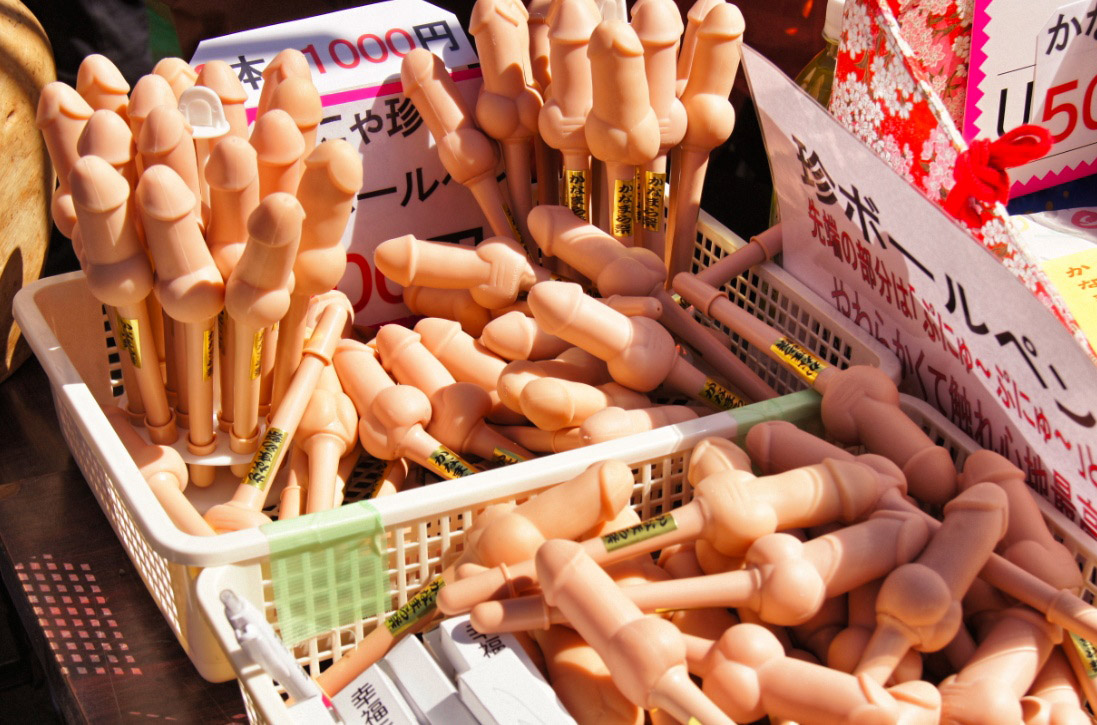 Thanks for the support from expedia.de and to my fellow penis worshipper Marcel from Amy&Pink