His strong hand glides over the soft skin of a shoulder blade and down the entire back. Slowly and tenderly his hand touches every inch of the naked, tanned torso to the sounds of ‘Adele‘. ‘Someone like you’, a bass-y dance remix, is blaring. His hand briefly stops on the stranger’s lower back, before it disappears in to his trousers and touches the well-shaped bum. 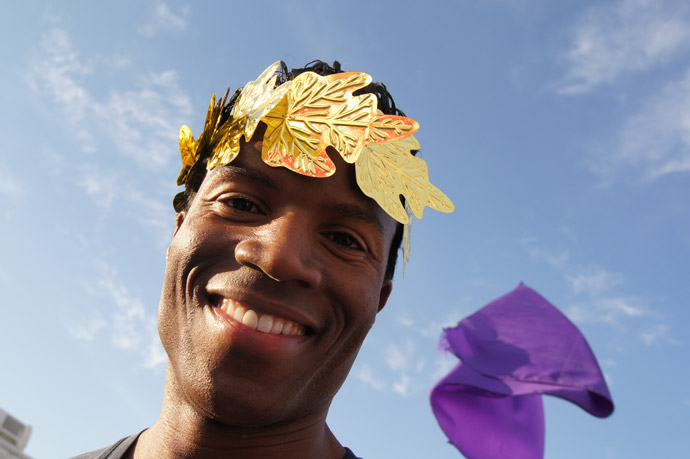 The hottest winter party starts off with a chill. It’s raining in Miami Beach. But it’s a well-received refreshment as it was to be a very hot day, not just in terms of temperature!

I’m visiting my second festival – the winter party festival in Miami Beach. The National Gay and Lesbian Task Force organises this event. 6 days of non-stop action. Art, Culture, Jazz Brunches and of course parties with first class DJs. The festival is dedicate to the LGBT community, ie the lesbian, gay, bisexual and transgender community. Parties and culture for more equality. Quite a fitting event after Lukaschenko’s recent comment!

My challenge for this festival was to see how many gay men I could get to kiss me. But I soon realised I had no chance: I was accepted as woman at the event, but with so many hot guys around, most guys didn’t pay any attention to me for longer than a few seconds. At 2pm the highlight of the winter festival party 2012 began – the beach party!

The festival area has a sun-protected large dance floor with 6 hot gogo dancers – 2 of them female – who were warming up the crowd. The VIP area was located above the dance floor and you could relax with a free drink and watch what was going on. After two drinks I lost all my inhibitions and started dancing on the dance floor between the sun lawns on which small square boxes were lying around. Tshirts were taken off, genitalia grinded against each other. The crowd turned into a pile of naked skin. The atmosphere was hot. As hot as the sun that finally made it through the crowds and was burning down on us. I stood silently, watching. Am warmed by the tenderness between men. Refresh with Bacardi and get dragged onto the dance floor by Dieter from Germany and get lost in the mass of muscular male bodies.

The last song is played at 7pm. After packing condom supplies for the rest of the year in my bag, I bid farewell and need to sleep. I’ve learned my lessons for the next festivals: Bacardi is a bad idea for quenching your thirst. And make sure you line your stomach with something greasy. But I’m not the only one traipsing home to relieve herself.

In my dreams Adele is singing ‘I’ve heard that your dreams come true’. America loves dreaming. Of a life as a strawberry queen or sexual equality. I like that! Dreams are great. And many of them do come true. 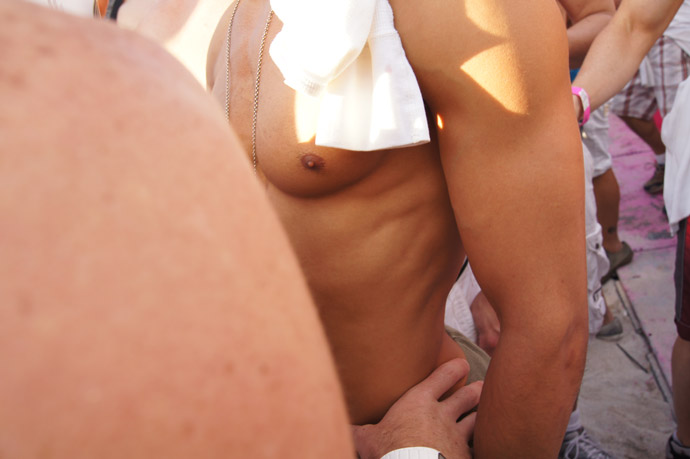 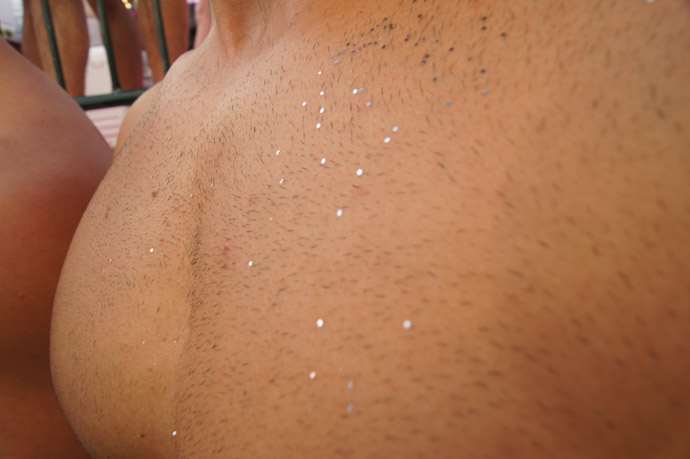